Tomorrow night is the Leonids and Nullohm will take a trip to a the forrest to get away from the city-light for a great experience. We have a a tradition of cooking reindeer stock from and old Sami recipe with a nice bonfire, and sleep under the stars if the weather is nice, cold and dry.

We always bring some gadgets, like the first LED lamp we made in 2005, the Can of Light, maybe a pair of Russian night googles, or even a fire piston made here in the workshop to light the fire (the flint method is preferred thou)

Last time we had a round up of all the Troll-stories we knew, and those are someone you don´t wanna meet… 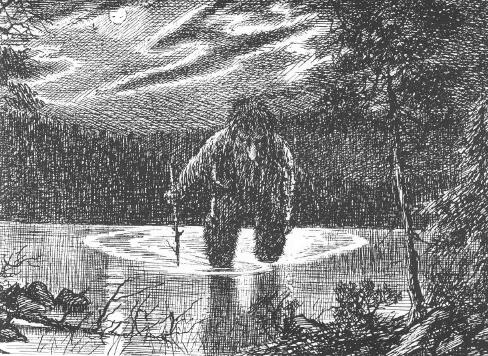 Gaute (one of our creative sparring partners from the design firm Uredd) told us about the old norse tradition of hammering in a piece of steel above the entrance door to protect the household from Tusser, Trolls and other unwelcome representatives from the underground. A phenomena still seen today in most Norwegian farms in the shape of a horseshoe above the doors.

We were discussing the origin of this tradition. Its believed that the steel itself was considered to have some magic properties. But steel items from those days are mostly rusted completely away. Bronze on the other hand last longer. And there has been found some fantastic bronze items that was really advanced machines, like the Antikythera

Since nullohm are realists we find the theory about “magic properties of steel” a little bit off. Its seems more likely that the object above the door were functional devices, and since all the stories says that barns and houses were full of nisser and other creatures of small size it seemed like the mechanism did not repeal the smaller annoyances (like Vettes pissing in the beer keg and nisseknuter made in children’s hair when they slept etc).

A plausible theory is that the mechanism was targeting Trolls, not only because they are big, -they are also big trouble. Where my family comes form there are the story about Risegygra ( A small female troll) that was so strong  that she attempted to drag  the not so small island Helgebostad onto the shore with a rope. Since no rope is strong enough for such a task she fall on her behind, and still today you can see the large imprint in the mountain rock shaped as her ass.

So a bell mechanism tuned into a resonance effect (well known among instrument makers) could perhaps make an alerting sound when the condition were right. And what are those conditions? Large creatures shakes the ground. And since trolls are the only big creature out there walking on two feet´s its only a matter of detecting the properties of the gait to distinct it from elks, bears and so.

Since we don´t know much about resonance and bells, but plenty of accelerometers and circuits.,- its time to design the Troll-detector 1.0 (just to be on the safer side when leaving for the forrest..)

The night in the forrest