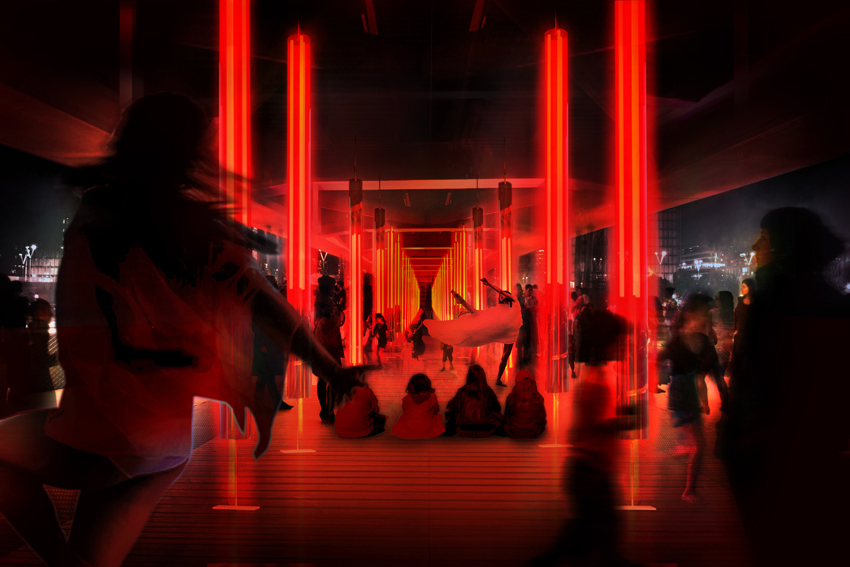 The light installation OF TWO by artistic research studio, OIDEM, especially conceived for the Simone De Beauvoir footbridge design by Feichtinger architects in front the National Library of France.

In the theme of the social encounter, OF TWO is the first manifestation of the “Social Bridge,” a project, which favors social and artistic ties aiming to create a cultural center in public space.

Norwegian based NULLOHM and Paris based OIDEM have created a playful light design with digital technology, sensors and radio-networks to create a light that underlines the architecture of the Bridge’s social aspirations.  44 red LED lamps in two rows of columns with NULLOHM’s Resonance System, an interactive design, which allows the interaction of the public.  Light waves trace a person’s path as they move to from one side of the bridge to the other.  A radiant glow of red enhances the skywalk to become a new landmark in the city of Paris.

The development of NULLOHM’s Resonance System was partially funded by Innovation Norway and The Norwegian Art Council in conjunction of their product line Respondent Elements, which has received major international interest. NULLOHM’s philosophy of design is to create intelligent systems providing energy efficient light on demand, which helps creates public ownership of the urban space as part of a well designed architecture and city planning.

OF TWO is a full-scale lighting prototype for future smart cities and will be developed into an industrial design product, which is IOT (Internet of things) enabled.

OF TWO opens for the public with music and cocktails on Saturday the 23, at 19.00 with performance by Compagnie Karina Saporta at 21.00

For more information and program:
http://www.oidem.com/oidem_le_pont_of_two_dp