The northern Light is not often seen in urban Oslo due to its southern location in Norway as well as the always present light pollution blocking the night sky. The Installation is part of a ongoing effort to create better public spaces in a neglected part of town is located in a small playground in Tøyen.

Zenisk AS asked me for some suggestions for light concepts to enter for a lighting-design competition by the commune, and the result was a aurora polaris design in the shape of two birch plywood arcs of 5 meters length built by Prototyper AS. The looped animation was made by 7minus. 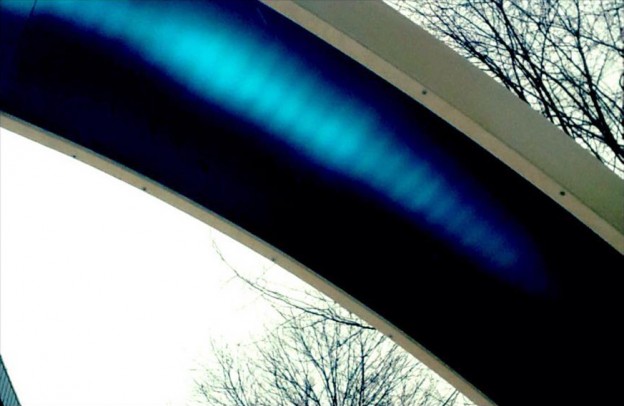 The created light effect enhances the lines of the northern light as an artist interpretive to give a strong expression similar with the real thing inspired by illustrations in children’s books and lately,- the new and much noticed graphical design for the Norwegian passport by Neue. With this in mind I have the last year been experimenting with the task of creating a artificial aurora polaris effect that gives the experience where you instantly feel it in the gut that this is (almost) it.

Artificial auroras has been made numerous times before as light installations, especially in part of Asia where the northern light is considered very exotic. Mostly these lights are just blobs of strongly colored light, not distinguishable from much other lights in the ambient category. On the other hand, is very hard to capture this “textures of light” by my smartphone camera, so some excuses for my “light blobs” in the dark part of the  videoclip below seems suited…